I wasn't sure I was all that excited about stopping at the Columbus Races on the way home, as the last time I was there, it was pretty damn disappointing. But I thought to myself, what the hey self, it's on the way, more or less, you might not ever be back this way again, and besides, Prairie Meadows doesn't race on Sundays, so I don't really even have that option. Columbus it was, or nothing, and live racing of any sort beats nothing every time.

It was a little longer drive than I anticipated, however, due to lots of 2 lane, some detours, and not much Interstate, and was highlighted by the only near-accident I got into this whole trip (of course, it wouldn't have been MY fault), so I found myself dragging in to the Agricultural Park on the NE side of Columbus about halfway through the 8 race card. Still, plenty of time to make some serious cash, if I played my cards right.

The stunning modern minimalist architecture of the grandstand at the Platte County Ag Park amazed me the first time, and amazed me again. 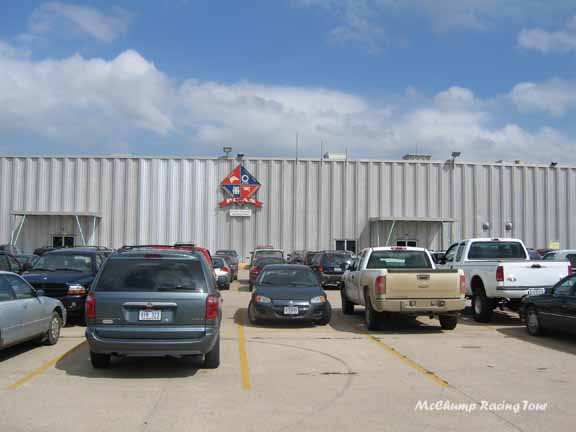 It doesn't look like all that big a crowd, and it wasn't, but this one was far more lively and fun than the small zombie convention I found the last time I was here. Perhaps it was because it was family day. There was a pony ride down to the left end, and a sandbox up against the grandstand on the right. It was filled with kids digging madly. Now that's entertainment. Or, maybe it was the many beer stands, selling a decent though mostly "light" selection of brewskis for $2 on a hot, hot day. Nah ... it was the sandbox. Food selection stunk, but the bad hotdog they did have was only $1.75. 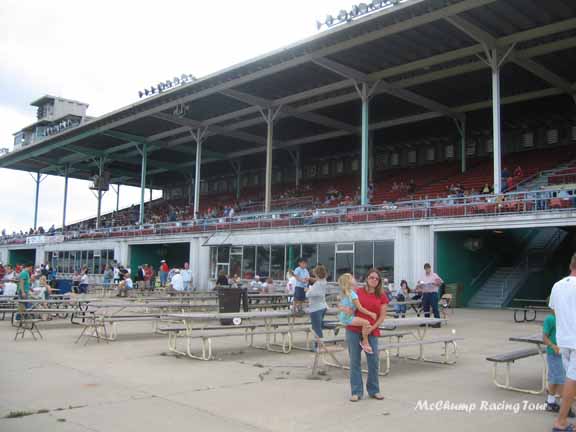 Here we have the beautiful paddock, again with that modern minimalist style.

And off we go!

Not an absolutely horrible infield, and back there, above the barns, where the raised berm is ... that's the busiest railroad in America, bar none. All day long car after car of coal headed east, probably from Wyoming, bound for who knows where, and car after empty car headed back west. You'd think they could find something to send back to Wyoming from the civilized world besides empty cars, but that's all there was. 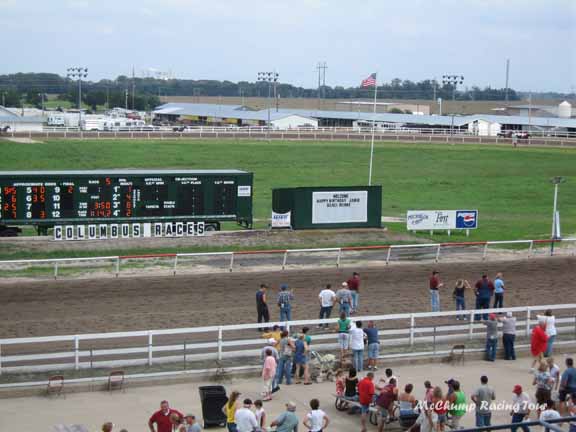 At any rate, by the end of the day, those crafty Cornhuskers had beat me out of a little less than $21, and it was time for me to slink off to overnight digs in East Bumble, Iowa, before the last lap to Chicago. But it was a pretty good day. Glad I stopped.