The McChump Racing Tour had its beginnings in small-ish town Montana. More specifically, in the stands of the Montana State Fairgrounds racetrack in the mid-1960's, where I'd go to sit and watch the races during Fair week instead of riding the carnival rides with my friends. Couldn't bet at ages 11 and 12, of course, but still I was fascinated by the races and the possibility of making money by simply picking the horse that would win. And, of course, fascinated by the vague sleaaaazery of it all. A far cry from Boy Scouts.

I didn't pay much attention to racing during 12 hazy years in Arizona during the '70's and early '80's. Not that I was really doing that disco and mechanical bull stuff - I was was actually still kind of stuck in the early 70's. But it's an excuse. 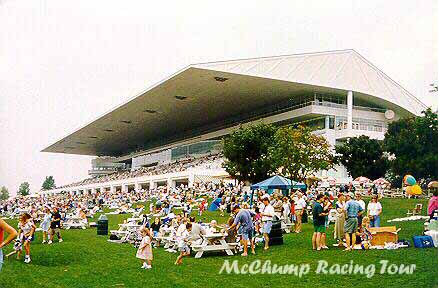 But after moving to Chicago in 1985, I started going to the racetrack again, albeit sporadically, maybe once or twice a year to Arlington on a summer Friday afternoon with a group from work. This girl named Sheri was always organizing a track outing that always seemed to end up with a Friday night party at her house. Seemed okay to me.

I wasn't really hooked with the gamblin' fever or anything - just out for the sun, some beers, the company esp. female, and some betting that I really didn't understand in the least. And which, quite frankly, I was sure no one could understand. But the horses had cool names, the jocks had cool silks, the girls' outfits showed some skin (note: some day when I have nothing to do we will discuss what a bringdown it is in that category, moving from Arizona to Illinois), the beer was cold, and Pat Day, he was a pretty good jockey at Arlington. One Friday afternoon we were there he won almost every race on the card. That registered with me for about 10 minutes.

But from 1986 on there was a new evil influence in my life, McChump #2, a degenerate gambler and race horse owner from Phoenix who I hadn't even met until after I'd moved away and then came back to Phoenix one Halloween weekend to visit friends. Some of us donned stupid costumes and off we went, to the old [original] 48th St. Monastery bar in east Phoenix. And there, through mutual friends, I met McChump #2, in all his glory, three sheets to the wind, and wearing a "knucklehead hat". (One of the great pictures never taken but believe me, when you see a knucklehead hat you will know you have witnessed a knucklehead hat.)

And how we had never met in all those years when I'd lived there and also frequented the Monastery ... well, I did say they were hazy years, now didn't I? Plus I'd had some supervision then and stuff but the less said of that the better. Man did we have a lot to blather about that night. No doubt it was one of the most intelligent conversations ever held. I just don't quite remember.

Anyhow, so it eventually came to be that McChump #2 introduced me to the fine sport of dog racing at Phoenix Greyhound Park whenever I happened to be in Arizona. Then when he visited Chicago for some conference or something, he would always want to visit one of the local horse tracks. I learned some of the fine points of parimutuel wagering from him (though that part about "winning" was still a bit elusive), witnessed on the jumbotron what McChump #2 said was this really big rematch race between horses named Meadow Star and Lite Light but it wasn't even close, and also learned that there were more tracks in Chicago than Arlington! as we visited Hawthorne and Sportsman's Park, as well. Who knew.

But still, I wasn't hooked, and not particularly on horse racing. McChump #2 would go home, or I would come home from Arizona, and I could shake it off and walk away. Not hooked, that is, until a fateful day in early 1994, when I was imposing on McChump #2's hospitality yet again while engaged in a baseball Spring Training binge. I'd already been to about six games and had dragged McChump #2 along to several, when all of sudden that evil influence McChump #2 suggested we try out a trip to the local racetrack, Turf Paradise, instead of baseball. Well, okay I thought, what the hell. And besides, I was tired of the Giants anyhow.

The Year of Enlightenment

Best Race of All Time

What a summer! Spent half my summer weekends at Arlington Park. Quite a honeymoon with racing at a beautiful race course. Lost my shirt, but had a great time learning about the great sport of horse racing.

Oh yeah. I was back in Arizona. Again. Only this time, for that end-of-summer Arizona blowout known as "Closing Weekend at Prescott Downs".