The endless Spring at the Speedway is over and the palace that Dick built is finally back, after two drama filled years on the sidelines. But the drama is over, and racing is back at AP.

Kind of a crisp, breezy day, but certainly not bad at all.

I arrived at 11:20am and there were already tons of folks on hand. That crowd got bigger until about the 2nd, when it was very, very crowded and pretty unpleasant (for someone who doesn't like crowds). 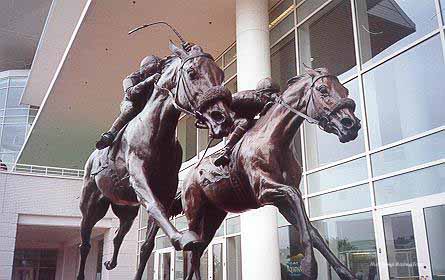 Overall it was a nice day, and good to be back at the track. It still rates as one of my 5 or 6 most beautiful that I've been to. A few signs of wear and tear, but not many. No real visible signs of change except now one of those fake paving stone walking rings instead of dirt.

Long long lines characterized the day, especially for concessions of all types. Not a good day for anyone wanting to do any serious horseplaying to be there, but fun to be part of a big, enthusiastic crowd with tons of families and kids.

Tim Smith from the NTRA made an appearance, but I couldn't hear a word he said. All the jocks got introduced. The lady who sang the National Anthem still remembered it's a perilous fight, not flight. Mark Guidry had won three races before I left. No real giant prices to be had. Kind of small fields. Kelly Sampson had two mounts while I was there but did not hit the board. John Dooley sounded more animated than he had at Spt.

Nice to be back. I do enjoy that track.

Handicapping Author Lee Tomlinson is scheduled to be on hand next Saturday as a guest of (whatever they call her job) Christine Gabriel, talking about how to use the Mudders and Turfers ratings. Hopefully they'll be doing stuff like this all season.

Don't know if they got any 40,000 - seemed less crowded than Cigar Day did. But they did get a ton of folks out.

Very enjoyable day, except for all the touristas in my way. :)

Today's Arlington Classic drew a mere 5 horses, with potential competition scared off by King Cugat. It also drew the attention of bridgejumpers, as $247,077 of the $259,754 place pool (no show wagering) was bet on King Cugat. By way of reference the entire win pool was $99,337.

King Cugat surely isn't an impressive-looking horse, but he sure can run, and won handily, paying a cool $2.10 $2.10 to his backers, and keying a $3.80 exacta. Figure the .075 track take in the first place and then the .10 payout, and Arlington probably lost $5000 on this one. I didn't copy all the win pool numbers, but that was likely a minus pool as well.

In other news, 1998 Gotham winner Wasatch finally got back into the Winner's Circle with a N3X allowance win, in his 4th race back after a year layoff. He's a big, good-looking, well put together chestnut, and surely looked the part of winner in the paddock.

Jockey Mark Guidry notched his 4,000th career win as part of a 3 win day, and got doused in champagne by Ray Sibille in the winner's circle. Tim Doocy is next on the countdown list, just a few shy of 4,000. Roberto Perez won the Don MacBeth jock's race, with Zoe Cadman running a bad last and either the 3 jock or the 4 jock taking a spill just before the finish line, but no vanning off was required. Numerous jockeys as well as trainers Bettye Gabriel and Christine Janks (ball thrown by Mark Guidry) got dunked in the jockey dunk tank, and there was a good deal of support in the general vicinity of the Kelly Sampson Fan Club for Christine Gabriel to take a turn in there as well but alas it was not to happen.

The weather was perfect, the atmosphere fun with all the jockey doin's, and all around a great day to be out at the track.