Down in the dumps about having to go to Hawthorne or the OTB's or even heaven forbid Trackside during the dreary winter months? Drooling over those constant press release teases from Arlington all winter long about how it's only 130 more days until opening day and GET YOUT TICKETS NOW!, or whatever? Miss the pageant, the grandeur, and the fresh dairy air of the northwest suburbs? Don't despair! You can get your fix of lovely Arlington and its grandeur and beauty this weekend at the Chicagoland Pet Expo!

This thing promises to be a much higher class event than those cheesy overstock sales/flea markets that Hawthorne runs in January and February. No "Computers! $89! VCR's! $14!" here. None a that crap, no sir. This is a high class event, with high class stuff, befitting the venue. For instance, did you know that in booth #207 you will be able to see "Hedgehogs by Vickie"? Not just plain old run-of-the-mill hedgehogs like you might see out back in the petting zoo at Ellis Park, but designer hedgehogs befitting Arlington, by Vickie, she of the marvelous website of the same name. Or that there might even be a hedgehog olympics on Saturday? And as if one hedgehog booth was not enough, there is even "Hedgehog 'N Around" scheduled for booth #160.

Whew what a day of fun that might be! And at beautiful Arlington!

Well now, as you might imagine, the McChump Racing Tour would not take note of such an event and then fail to do anything about it. At least not when we can get someone else who was going anyhow to actually do the work. Thus it happened that among the huddled masses who passed the Pet Expo gates at Arlington on Saturday was a McChump Racing Tour spy, equipped with a Secret Sam spy camera and a discerning eye, charged with observing the Pet Expo in general, and the big hedgehog doin's in particular. The unclassified portions of the spy's report follow:

Miss Vickie was observed to be polite, but somewhat aloof. She was judged "not the type" to be informed that the "Hedgehogs by Vickie" website is a hoot, as had been requested by employer. Hedgehogs themselves observed to be very shy. Maybe them and Ms. Vickie a good match. Hedgehog N' Around folks "much friendlier."

Here is a surveillance photo of a hedgehog in Miss Vickie's hands.

These were held up on the 2nd floor, somewhere in the vicinity of the west mutuels. There were two types of events, one with free running hedgehogs ("the hurdles") and several with hedgehogs stuffed into plastic balls rolling around on the floor ("the garden slalom", a sort of obstacle course around some fake flower pots, and some speed events on a dash course that looks like a little kid bowling alley with retaining rails). The hedgehogs' most consistent trick, however, was to take a dump and pee as soon as they got put into their little plastic ball."

Here is a surveillance photo of a hedgehog named "Bucky" in his plastic ball. Unreported as to this was "before" or "after" the special getting into the ball event. 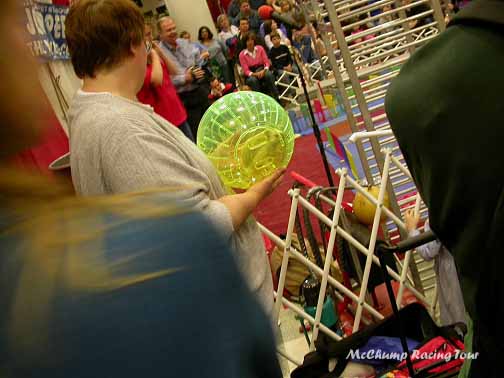 Here is another surveillance photo, this time showing more of the hedgehog olympic grounds, and more specifically a hedgehog named "Prickly" on the speed course. The spy apologized for the quality of the photo, but Prickly was just such a blinding blur of speed. 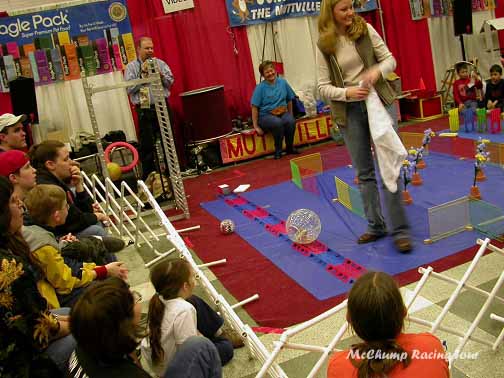 It was also reported that since hedgehogs are such shy little guys, there was no clapping allowed. People had to just put their hands in the air and sort of wiggle and wave, like some 1950's dancers. No doubt the hedgehogs, or their masters, were busting a gut over that one. Damn I'm sorry I missed that.

Other good Pet Expo booths were reported to be: Boa constrictors, chameleons, and sugar gliders. There was also lessons for dancing with your dog, just like Hank Hill. Big cat show in the Starting Gate theater area. And just so, so much more.

Whew! Sounds like quite a day at Arlington. And classy, too.