I awake to a beautiful mountain sunrise in Durango, and a chilling down-to-earth realization: I am about to miss the first weekend of racing since Chicago's winter break.

I briefly toy with the idea of driving down to Prescott, AZ, to join McChump #2 at Prescott Downs, but bag the idea when I realize the people I had come to visit in Durango in the first place might consider such a desertion bad form. I resign myself to a raceless weekend.

After spending the morning with my friends, the rest of the group decides to visit Mesa Verde. I decide not - I was there once when I was a kid, and doubt it has changed much. Hoping against hope, I head back to the motel to ask the lady at the desk if there might be an OTB in Durango. On the way, I notice a large grandstand-looking structure that appears to be drawing a crowd. I ask my hotel clerk what sort of doin's are fixin' to transpire.

"It's Fiesta Days. They're havin' a gun show, and a carnival, and a rodeo".

Well that's something. At least we got some pm entertainment.

"And I think there's horseracing later on".

I hustled on down the street to the combination gun show, carnival, rodeo, and horse races. After taking in the sights at the gun show (and wouldn't you know it - I forgot my NRA card that would have saved me $2 on the admission), I strolled down to the rodeo to kill the time until racing. As I paid my $7 rodeo/horseracing admission, I asked if there were some forms or sheets on the races. I intended to make good use of my time as the cowboys and cowgirls busted those broncs and rassled those steers. Well, no ... but there'd be some right before the races. Okay - that's gotta do.

I settled in and watched the rodeo. I saw little kids riding bucking sheep, and a pretty cowgirl whose job seemed to consist mainly of riding around the ring after each event, smiling at the crowd. I smiled back. No luck. I felt my arms and face turning lobster red crisp in the bright mountain sun, and felt compelled to replenish bodily fluids with multiple $1.75 Coors products. And the team steer roping dragged on.

But finally the big bull riding grand finale event was over, and it was time for racing. Hooray! The entire crowd traipsed out of the rodeo ring and headed for a few sets of bleachers set up on the backstretch of the racetrack (the carnival and rodeo, being set up in the infield and on the far turn and on the home stretch, effectively cut the track down to just a useable backstretch).

"Today we're gonna have Calcutta wagering and a $2 Win ticket!", announced the announcer. Okay - I can live with just win bets, but I had no idea what the hell Calcutta wagering was. I stepped up to the little 2 teller wagering window and asked for a program.

"Well hon - we don't have any. They printed some up, but then they changed the races all 'round. You'll just have to bet your hunches."

Drat. Reduced to the last handicapping tool left to me - telepathy.

The racing officials finally got their act together and pulled the six horses for the first race. The six riders pulled on (properly) colored t-shirts with numbers on the back. Finally we had a betting proposition. I noted two of my "runners" in the race and went down to bet. And betting was not a simple action. There were handfuls of preprinted tickets with six numbers, repeated twice on each. You gave the teller your number, and she punched out that number on one side of the ticket, then the other, then tore the ticket in half so they'd have a record of the bet. And if she didn't punch it exactly right - tear it up and start over. Painfully slow. But I got my bets in.

Meanwhile, a ways down from where I was, a most amazing event was transpiring. Each of the horses in the race paraded around in front of an official looking table, while an auctioneer called out numbers, dollar numbers, numbers like $50 and $60 and $70. I have to assume that this was the Calcutta wagering (auction betting?). No one close to me had a clue what was going on either, and I didn't wander down to see what was the deal, so it will remain forever a mystery. 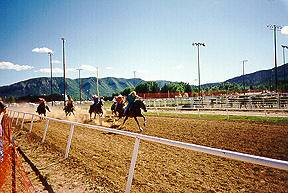 After 10 minutes or so of this, the horses went on down to the turn and started lining up for the race. No starting gate - just kind of line them up, get them moving forward, and then go. As you might imagine, this wasn't easy. But suddenly they were off and sprinting the 220 yards to the finish line, riders kicking their heels in the long Western saddle stirrups, the braids of the unhelmeted cowgirls flying in the wind, and one of my horses was winning! But what's this? Fifty yards from the line the rider of my horse is hauling back on the reins! FIX! FIX! But the results were announced, and he'd won, and my other horse had finished 2nd. I felt pretty smug about my equine telepathy skills.

But wait! "Ladies and gentlemen, we had a false start. We're going to have to rerun the race".

The rider of my horse was not happy. Neither was I. But they traipsed on back up to the turn and ran it again. The result 1-2-3 was exactly the same, and once again my rider was strangling his horse at the end. I can only figure he didn't want to kill the odds when he had to run the other heat winners later. A man in the ticket booth figured out the payoffs by hand as all us winners waited in the single payout line, using I assume the stubs that had been torn off, my winning $2 ticket paid $7, and I had a quick $3 profit. Alright!

The riders from the first race pulled off the colored t-shirts and passed them to the riders in the 2nd race. Once again I noted two of my runners in the 2nd race, and bet them both. I won again, to the tune of $10.50. What a champ!

In the 3rd race, the 2 horse was a strong favorite (per the trackside talk), and when I went to the window to bet I overheard the payout guy mention that if the 2 won, they'd have a negative payout. Idiot that I was, I only bet the two horses I'd gone to the window to bet, and didn't cover the whole field but the 2. Naturally, the 2 lost. So did my horses. I was devastated. I was also hot, tired, and they weren't serving beer by the racetrack. I decided to skip the upcoming mule race and the winner's race, and took off.

All in all a fine day of racing, which really was fun no matter what it may sound like, and I had a great time and cleared a cool $5.50 profit! Thanks, Durango!

OH NO! The mighty sea-green (w/beautiful forest green interior) rent-a-Taurus has driven too slowly from Durango to Denver, and I missed the card at Arapahoe. That didn't stop me from taking a drive out to east Aurora to see the track though. Looks nice - although I wouldn't want to be stuck on that skinny little road when the races are letting out.

The crown jewel of this McChump Racing Expedition, the only event I'd actually planned - the State Fair Meet at the Montana State Fair grounds, at which site I had witnessed my first live horse races some thirty years ago. 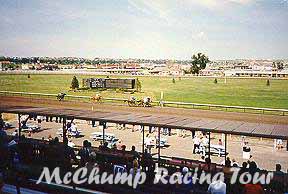 This is a surprisingly pretty little bullring set against the backdrop of the spring flood swollen Missouri River. The infield is well manicured with lush green grass - unlike some I've seen that have trucks and old cars up on blocks in the middle. The grandstands are well kept, and the concessions are outstanding - $2.00 big sausages, and $1.50 beers. A 90 BSF for sure!

The simulcast offering consisted of the card from the Pleasanton fair, so I bought a program to see if there were any of the CRT's trainer's horses running that I could "bet with both hands" (his term), but there weren't. I would have to stick with the live card.

Most of the horses were Montana breds, with sires and dams I've never heard of, with a few Washington horses and the occasional Kentucky or Oklahoma bred thrown in for good measure. The races themselves ranged from CLM2000 up to allowances for horses I assume would run for no more than open CLM7500 elsewhere, and were run for purses of $1000 up to $1625 for the featured allowance race of the day. Jocks in Montana seem to be allowed more than just one peanut, as horses handicapped at 116 routinely were announced at up to +7 lbs.

As my companion selected her horses according to name, I perused the program and attempted to actually do some handicapping. Hah! Those pesky $1.50 beers! We limped through the card up a little, the down, then back up. Finally, in the 7f 8th, I knew I'd found my horse - a gelding by the name of Imperial Holiday who'd been running uninspired MDN32000 races at Santa Anita, and then kicked butt by 8 just as soon as he'd shipped up to Montana. I had no reason to believe he wouldn't do it again. I boldly laid $20 to win and watched the odds sink from 6/5 to 4/5. Still, it seemed a gift.

Imperial Holiday started well and pressed the leaders going into the 1st (or was it the 3rd?) turn. Suddenly he seemed to stumble, and was effectively out of the race. I watched, devastated, as he finished 4th. The winner got taken down for interference and causing Imperial Holiday to clip heels, but still, 3rd didn't pay me a cent. All the wind was out of my sails.

I stayed for the rest of the card, and made up a few bucks on the last couple races, but still ... my fantastic winnings from Durango and then some were left with the Great Falls betting public.

But as we walked back to the car, I got to thinking, hey - I'd kept the strings of racing weekends intact, and had a great day with good company in beautiful cool Western weather, not to mention cheap beer and FUN! It was the perfect ending to yet another Fine McChump Racing Expedition(tm).