Saturday, the last day of the Fairmount meet, and the final day of Dave Gall's riding career. One of those perfect Midwestern Fall days that makes it all worth living here though the humid summers and slushy winters. Blue skies, some puffy clouds, mid-70's temps and no humidity, corn fields turned golden and either standing tall or in the process of being harvested, and road construction. A day that just cried out for a 5 hours drive from Chicago to Collinsville.

Plenty of road construction, all the way from the Loop of Chicago down to St. Louis, with an especially ugly section in scenic Plainfield, tornado magnet of Illinois, that provided one plenty of opportunity to appreciate the corn fields and the Sunday edition of the Scum-Slimes and its article about Arlington seeking the Breeders Cup, while sitting stone still on I-55 out in the middle of essentially nowhere.

All's well that ends well, though. 6-1/2 hours into a 5 hour drive, the Chumpmobile could be observed pulling into the always free parking lot at Fairmount Park, one of the McChump Tour's two homes away from home. Shortly thereafter, the trusty Illinois owner's card could be observed negating the price of admission, whatever it was.

With a good 1-1/2 hours till first post remaining, despite the delay, having misjudged first post time anyhow by an hour, there was plenty of time for wandering around and taking in the sights, not to mention a little handicapping. The sights weren't too many, Fairmount having changed very little since the last visit, except for the very nice new paddock and walking ring, a nice breezy wood construction thing with little spires and everything affair occupying the space where the old shed used to be. Lots of nice landscaping around the walking ring, and overall a very nice presentation, and I'm sure it looks real purty on the simulcast signal. I think next year they might want to spring for a new water truck though - the old beater out there spraying down the track before the races sounded like it was on its last legs back in 1959.

In the meantime it was discovered that giant beers indoors ran $3.25, while the Coors special outside ran one $2 a bottle. Decisions, decisions. Meanwhile, an announcement to the backside was overheard that there'd be a delay after the 3rd, leading to internal speculation that there might be some doin's planned for after the third, and the biggest crowd I have ever personally witnessed at FP started filling the grandstand and the apron. And the weather was beautiful. 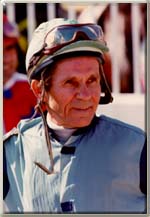 Sooner, rather than later, it was 7:30 and time for the live card to start up, and Dave Gall made his first appearance of the night, slated to ride the #2 horse which put Dave right by the crowd by the paddock rail. He discreetly turned his back to us and ignored all the catcalls from the peanut gallery, and shuffled rather nervously until his trainer came over and gave him instructions and then a leg up, and finally Dave looked like he was comfortably back in his element and seemed to relax.

Dave won that first race, aboard Delicate Star, with a very nice come from behind effort down the stretch, for his 7,394th career win, and moving him into a tie with the meet's leading rider Jim Bielby. Score: Bielby 131, Gall 131. Meanwhile, a gentleman near me was heard to curse that damn Gall. I felt it necessary to engage this gentleman.

"He can't retire soon enough to suit me", groused the cursing gentleman. I felt real bad for his family who had to listen to this loutish outburst as they chowed down their burgers at their pic-a-nic table. Meantime, Dave had beat me out of $12. That darn Dave.

For you see, I had decided early on in my handicapping that the only way to win this particular evening was to bet against Dave Gall, as the huge crowd was going to pound him down in each and every race. So I bet against him in the 1st and lost. But in the 2nd I was handsomely rewarded, as I'd noted the #8, Anczara, trained by a top FP trainer, Eddie Essenpreis, ridden by a top FP jock, Cindy Herman, had added Lasix and just had a snappy little 49.4 workout, and even though Anczara's only two pp Beyer figs were eye-popping -0 followed by -0, I'm thinking "just what do you need to win a mdn $3k claimer?" So I bet the filly, and here comes Cindy blazing down the stretch to collar Dave's odd-on horse just before the wire and I'm rewarded by a $42 winner and an $88+ exacta and I'm set for the night. Hit the beer stand.

As I suspected, there was indeed some doin's after the third race, as it turned out down by the Winner's Circle, and as it turned out, Dave Gall was right there, having won the 3rd for his 7,395th win, and taking a one race lead on Bielby.

FP VP & GM Brian Zander came out to make the presentation to Dave, and the presentation consisted of a nice little speech, with the obligatory joke of "I don't know if they are sad to see you go, or glad", and the presentation of a very nice bronze sculpture titled "Riding Briskly", plus a plaque to be filled in later with Dave's total wins. Then Dave gave a very nice and gracious speech, thanking everyone, including the fans, "those who booed and those who cheered", notably mentioning "those who booed" first. Then there was a photo opporutunity with tons of Dave's relatives on hand - his wife, mother, brother, sister - all there to celebrate a glorious close to a 40 year riding career.

The crowd started sort of piddling on out of the park after that, even though there was still 8 races to go. Jim Bielby won two races to go back up one on Dave, and I missed a $52 winner that I should have had if I'd been looking at the odds board which I wasn't by then.

Finally, race 11, 1m70yds, clm3000n2l, the kind of race Dave has been riding most of his career, and trainer Eddie Essenpreis has set Dave up sweet in this one, with a hoss named Sturley that has Beyers about 20 points above any of the competition, consistently. Bielby has picked up a mount in this one, replacing Uriel Lopez who it seems has taken the day off early to head to Beulah or wherever he's headed, leaving many trainers in the lurch and scrambling for riders all night long. It's the big showdown for the 1999 riding title at FP.

The crowd, however, is not fooled. Dave's horse opens early at 1/9, and barely drifts up past there to maybe 2/5 at post time. Sturley, with Dave Gall aboard, wins the race easily, for win #7,396, and Dave ties Bielby for leading rider at the meet with 133.

Good luck and a happy life, David Gall. It's been an honor to be involved with an Illinois racing program that had you as part of it.

There's a few scattered handclaps after the 11th, and the much reduced FP crowd starts filing out pretty damn quiet.